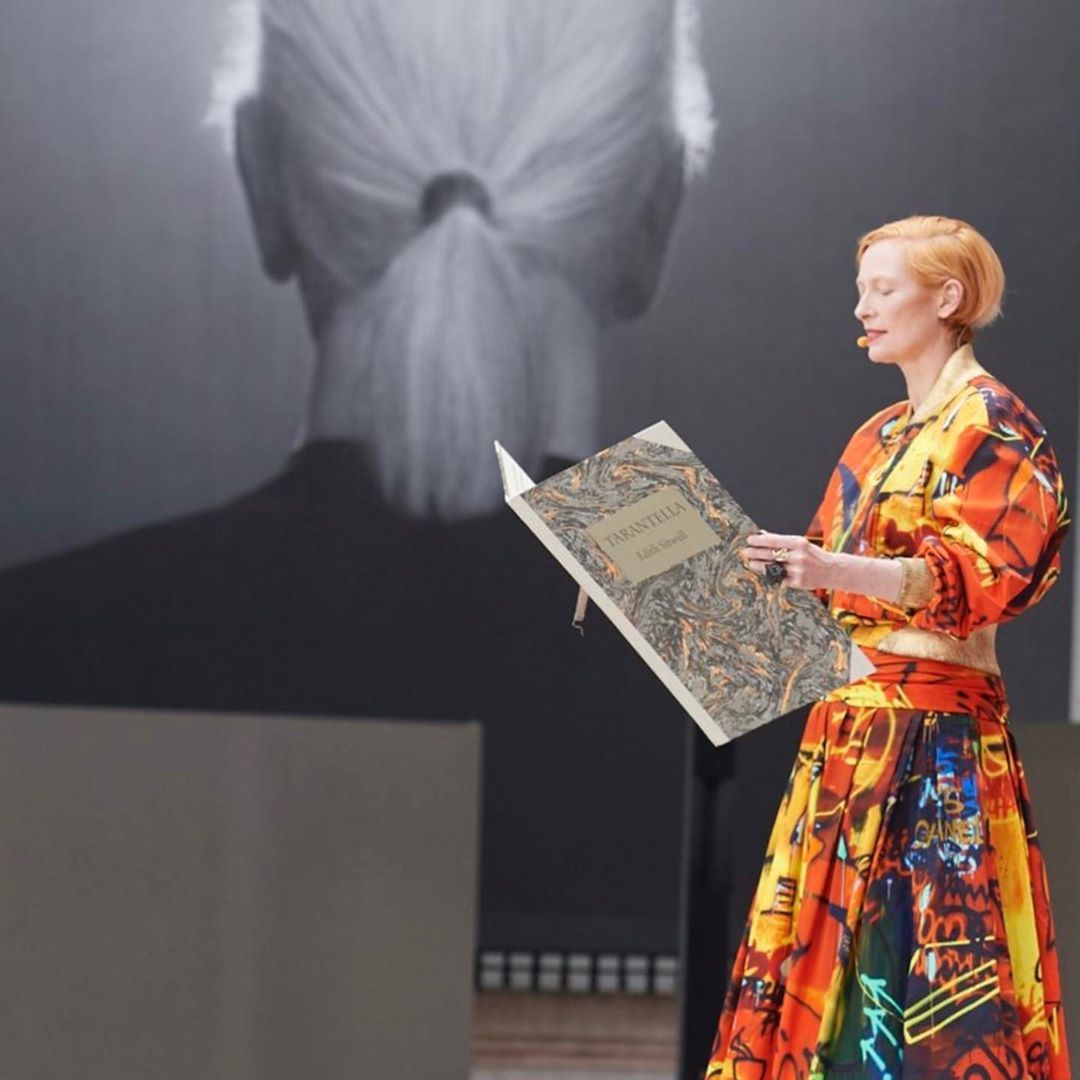 #EdithSitwell, the legendary eccentric, explored the distinction between poetry and music in Façade (1922), a series of abstract poems set to music by William Walton. Yesterday @le_grand_palais, #TildaSwinton who happens to be Dame Edith’s cousin performed her #Tarantella in the homage #KarlForEver. The Tarantella is a poésie-dansée of a couple in the form of survival from a Dionysiac cult driven underground. The couple is Dionysus, the ever impossible #JacquesdeBascher and his companion Silenus, tutor to his wines, #KarlLagerfeld. The driven underground? the scène parisienne: Nuage, Palace of party gods of drink and debauchery. Dame Sitwell wrote her Façade poems as studies in word-rhythms and onomatopoeia. Karl Lagerfeld sketched his collections as studies in muse-rhythms and classic beauty in her same dissonances and assonances. His couture grasped l’air du moment from the poems of Sitwell, platonically, following the idea that he was designing primarily for clothes, rather than reality, echoing also Edith’s sounds of solid technique and painstaking craftsmanship.
_

“Where the satyrs are chattering, nymphs with their flattering glimpse of the forest enhance
All the beauty of marrow and cucumber narrow and Ceres will join in the dance.”
_

You can hear what sonic effect Sitwell is after – the eighth-note triplets of “sa-tyrs are/ chat-ter-ing / nymphs with their / flat-ter-ing” with lots of internal and end rhymes. It’s not precisely the tarantella rhythm but it mimics it. It’s not precisely the fashion rhyme but it mimics it. Edith. Karl. Karl. Edith. All of the poems in Edith’s Façade are like this – written for rhythmic and sonic effect. All of the collections in Karl’s Fashion are like this – designed for prolific and classic effect. Both were entertainers for artists and people of imagination, lovers of absurdity and beauty. Both were muses for poseurs and adorners of eccentricity, lovers of anti-absurdity and grandiosity. On stage, Tilda Swinton brought her gleaming and grotesque, comically and seriously, against the tyranny of conventional legacy. Karl. For. Ever.
_
#ALESSANDROBERGA | L’ÉDITOR
#PARIS #KARLFOREVER #MODEDIPLOMATIQUE (at Grand Palais – RMN (Officiel))
https://www.instagram.com/modediplomatique/p/By_rdelHnzf/?igshid=90429igsjtc